It’s time for sexy, beautiful, and smart black superheroes. Black Barbie is not enough to change the world. We need black superheroes that don’t wear weaves and some that even have short, bald, or no hair and are still made to be super sexy. We need the black woman superhero woman that rocks an Afro. Why don’t we have this?

Marvel, the purveyor of superhero franchises, has given two vocal and constantly sparring online communities a new reason to wage battle this week by changing the gender, age, and race of a canonical comic book character.

Whether or not the fans were flamed on purpose is up for debate — but what’s certain is that Iron Man will soon be a 15-year-old black girl from Chicago.

Meet Riri Williams, a science prodigy who leaves the “chaos and violence” of her city behind to enroll at MIT, where eventually she reverse-engineers an Iron Man suit in her dorm room. Ever since Disney took over the Marvel empire, they have certainly done their part to bring more Black superheroes to the big screen. Kudos to Marvel comics, whatever their incentive is for increasing the presence of Black superheroes. Eartha Kitt was black and she was the original Cat Woman for DC comic books. It obviously has nothing to do with sex appeal. Most black women have superhero bodies. Black women, especially the mothers, also have to become superheroes in real life. Black single mothers are real-life superheroes. 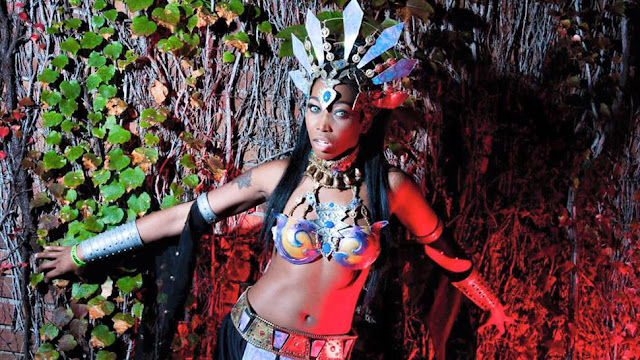 Most beautiful black wonder woman ever

These are gorgeous and sexy – stunning, black female superheroes. This is cosplay. These beautiful black women show how beautiful, sexy and hot Black superhero ladies would be. There is definitely an appealing market for more Black superhero woman and it would be so great for Black young ladies to see people who look like themselves save the world or even just the day.

Shana of Jem and the Holograms black cosplay

If these pictures of black women who cosplay prove nothing else, they prove that black women look hot when they cosplay as superheroes. In fact, men would like to see more of this. Fantasy is reality depending on which perspective you employ such thought. This means that Black women who Cosplay give a different perception of that reality to all the men who love to see Black women Cosplay.

Black Women By The Pool

How To Keep Love & Sex Alive